Can Playing The Violin Make You As Smart As Albert Einstein?

Benefits of Playing the Violin

Albert Einstein owned several violins over the years and he would call each of them “Lina“, an affectionate nickname which is a short form for “violin”. He rarely left home without his music, and it inspired him as he developed some of the most important theories in science.

Einstein knew then what so many are discovering now: playing the violin is very fulfilling. It’s known to be the most expressive, sublime and fun instrument to play (but I could be a bit biased, of course).

You might think that playing the violin is an interesting hobby; it even allows us to entertain an audience. But have you ever asked yourself if there are any other benefits to be had? It turns out there are many mental and physical advantages to playing this noble instrument. 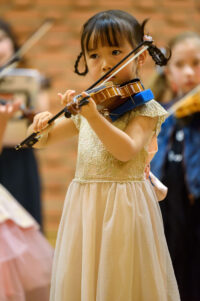 Musicians who play string instruments develop areas of their brain that others don’t.

A study was conducted with children who played string instruments compared with other non-musician children. String players were chosen because their left hands use different amounts of finger and thumb pressure and movement during playing. Their right hands also move, but with less individual finger pressure and movement. Research showed that the brain of the string players were not only larger, but parts of the brain that are sensitive to left-hand finger motions were more responsive than those of the non-musicians. Why does that matter? It means mental imaging differed between string players and non-musicians, with string players having greater brain development.

Violin is one of the only instruments where the pitch must be “created” by the musician. Dropping the finger one millimetre too high or too low can make the song sound out of tune. In order for violinists to play in tune, they must be able to hear the music in their head before they actually play a single note (pre-hearing). They have to stay connected to the music during the whole piece. As a result, they develop strong concentration skills.

Also, because the musician hears the sound in their head in advance, the pitch guides their fingers where to drop. This relationship must be intact until muscles in the fingers memorize where they should drop to create the correct pitch. Losing this connection often means an off-key performance.

Research at the University of Illinois examining the effect of the Suzuki violin instruction shows that “aural skill development in musical training contributes to enhanced processing speed and verbal memory performance in young children. Data suggests that auditory chunking strategies, acquired in Suzuki violin instruction, transfer to memory recall and learning strategies for verbal content.” The Suzuki method is based on ear training and repetition of what we hear on the violin. Just like the way a baby starts talking – they hear the sounds and they start repeating what they hear until they can pronounce the words correctly.

This relationship with sound not only develops a stronger ear for the violinist, but it also improves concentration and the attention span. This benefit definitely helps in many other aspects of their lives as well.

Violinists are known to be strong at multi-tasking. The fingers on their left hand consciously search for the most precise spot to drop on the fingerboard to create the right pitch. This requires training each finger individually to make them function independently and that results developing strength in each finger.

Their right hand has a different mission. It must control the bow movements in collaboration with fingers, wrist, forearm, and upper arm creates different sound effects and controls the volume of the music. 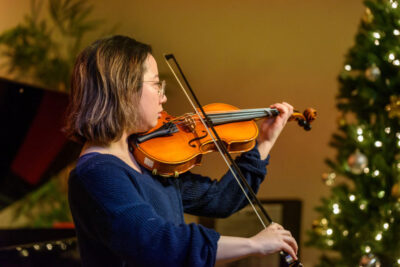 Have you ever seen a professional violinist hunching over?

In comparison to all other instruments, the violin requires the most impeccable posture. You need a great amount of balance and strength to hold the body and the violin in a proper position. The more you practice, the more you notice the difference in the way you carry yourself through your back, abdomen and shoulders.

Playing the violin requires an incredible amount of strength in the upper arm, forearm, upper back, chest and shoulders.

As a beginner, holding the violin while keeping the right posture might be tiring. But your physical stamina will improve the more you repeat the movements. You will notice your deltoids, biceps and pectoral muscles becoming stronger and visibly toned. Getting better conditioning while making beautiful music, you can consider playing the violin as the full upper body workout you normally do at the gym!

So, will learning to play the violin make you as smart as Einstein? There’s a lot of evidence that says yes, but I encourage you to try and discover whether you’ll find the joy he found while playing. And maybe you’ll eventually have a “Lina” of your own.